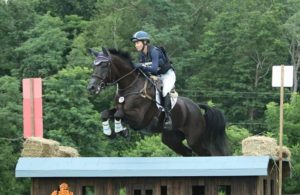 The last weekend in July proved to be an exciting one as both Favian and Dewey Square left the comfort of their #1 positions on the USEA Leaderboard and moved up a level at the New Jersey Horse Park II event.

Favian put in a respectable test for a horse green at this level. There is a significant amount of lateral work to do and a greater emphasis put on medium work and transitions. Favian handled it very well for his debut, and sitting 5th after dressage, leaves everyone optimistic for his future once he is confirmed with this collection work! He is certainly an impressive one to watch for the future. He put in his best show jumping performance to date jumping carefully and confidently. The ring crew even requested a picture with “Black Beauty” after his impeccable round! Cross country was much of the same. He flew out of the box, clearly confident after his trip around Bromont. He answered all of the questions enthusiastically and with ease! His long stride and efficient jumping style made him the fastest of all of the XC rounds and he went on to win convincingly the Open Intermediate division!

Dewey Square also made a big move up this weekend. He had the fanciest moves of any Training level horse in history in the warm up! Unfortunately his ring was running late and he ran out of steam during his actual test. Still he managed a 28!! and a top placing. His show jumping reflected the regular work that Valerie has been doing on his accuracy and his form. He barely tapped a rail behind for a cheap 4 faults; but was very proud of himself for jumping around a course that included a triple! He carried that confidence onto cross country where there were several combinations and a lot of big galloping fences. He had one green moment at the water and Valerie chose to school him through it, incurring jumping and time penalties that took him out of the lead. But it is all an investment in the future which looks bright for this very talented OTTB!