What a week! I don’t even know where to begin.

Shocking to no one, the beginning of this trip found me out of my comfort zone. Flights costs and dates were all speculation, even if I had a set plan budget and intention! The plan changed 27 times. If nothing else, this adventure is confirming that the universe makes everything happen like it is supposed to, even if you don’t understand it in the moment. The passing of my Gram was a big hit to the mental side of the start of this trip. She had been on this planet for 97 years and yet I still wasn’t ready to say goodbye. I can’t thank my team enough for adapting and getting me to Indiana whilst Favian needed to get to England! On top of it all my credit card number was stolen while I was at the airport and it’s been canceled. They promise me a new card will arrive at Wood Lane Monday evening. A very special someone gave me some cash for the trip Thank god. I could take some of this cash to the villains at the airport and exchange it Literally I go to the store every day and see how little I can live on since I don’t have a card. Conner and I had about 15 minutes together at Heathrow Terminal 5 to catch up before completing our mission impossibles! I know she so badly wanted to stay and it was very hard to say good bye! 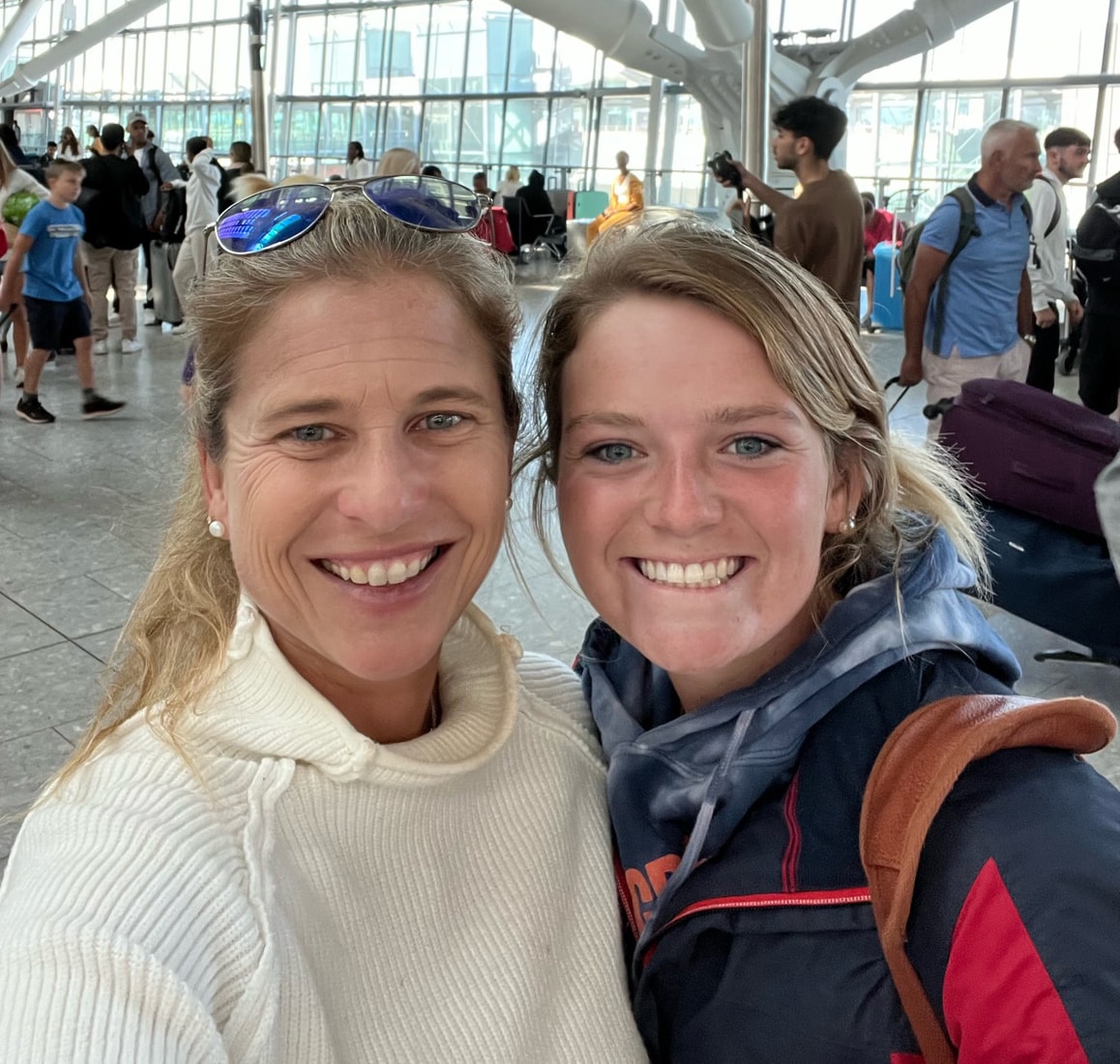 I arrived at Wood Lane Stables, home of Fox Pitt Eventing, to find Favian well settled and that Conner Olivia and Lauren had done a fantastic job of packing! 6 weeks on the road is a rather daunting figure to calculate! In hindsight perhaps I should have asked; but the biggest surprise was finding Favian serving 2 weeks of quarantine once at Wood Lane. There are 3 potential WEG horses and 2 potential Burghley horses all on the yard and so we have been rerouted to the Isolation unit of the yard. Thank goodness they have sacrificed their racing Shetland named James to get Favian through these tough times. Picture to follow but he is Favians mini me and at only 12 hands might also weigh as much as Favian 😂 While this is not ideal, Favian has been taking it mostly in stride. Namely by taking very big very fast strides any time he is out of his stall‼️

The resources available here at Wood Lane are just indescribable. Helping Favian cope with quarantine is the giant walker, a key to this program. He goes on it for roughly 40 minutes in the morning (race to do his stall etc during this time) and then 30 minutes in the afternoon. After a heavy work out session he will cool out on it once quarantine is over. Until then, well, we take lovely romantic walks around all of the fields. Of which there seem to be thousands of acres! And a mile gallop! To add to his strength and core work, I was sent last week with a few horses to the aqua treadmill a few towns over. Favers did not know that he signed up for all of this! 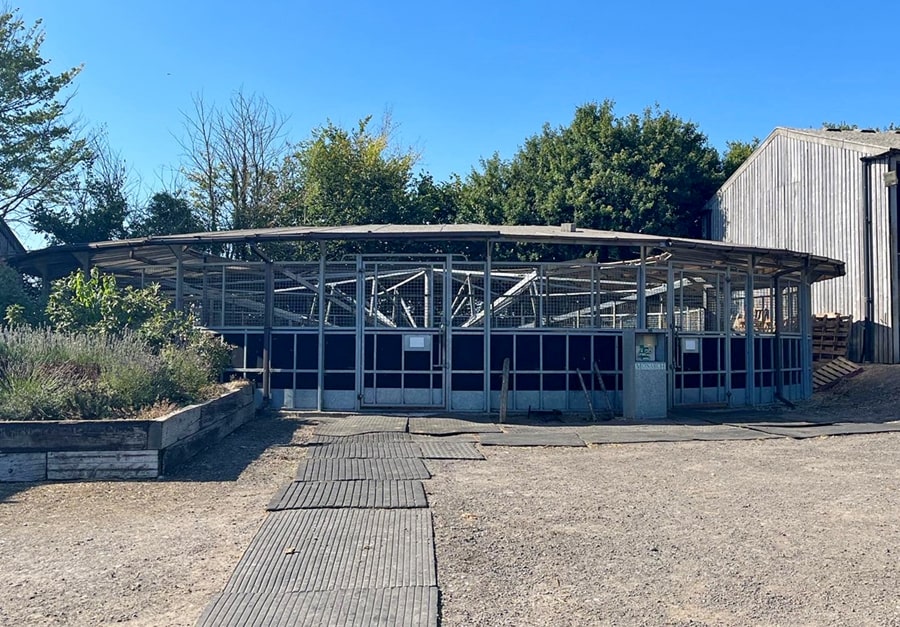 I am so proud that our little program in West River really compliments that of the power house Fox Pitt Eventing! I have held my own with WFPs barn manager of 29 years. Any difference that we have seems to be due to the numbers in our stables and not an underlying conflict. They have two washing machines and zero dryers I mean is this fate or what hahahahaha William and I are terrifyingly a lot alike. He went with me on a gallop the other day and during our walk down the side of the gallop we were discussing the birds we could see across the way (I saw a pheasant on day one surely that is the best of luck!) when he noticed all of the rocks on the track and immediately told the girls with us that we had better get rock picking on the schedule ASAP. I know my girls right now are dying reading this! He has an out of control lurcher puppy, she’s one year old and needless to say I adore her 💕 He has a million preferences all of which he says is due now to him being a funny old man. I’m not old nor a man and have the same preferences what does that mean. 🤷🏼‍♀️

The schedule is something I might never be able to adapt into my program. No one knows what they are doing in the next hour let alone the next week. He enters every horse at every event and then withdraws around 5PM the night before. I have been told to be ready for a lesson in an hour and literally while picking Favian’s stall they bop in and say be ready in 5 minutes. 5.

This leads into our first XC school. No one even knew where we were going except he told me it would be 1.5 hours away (so I could mentally prepare to pack a lorry that’s an entirely different email) and so the entire staff was sorting out all of the places that could be 1.5 hours away ha! We are in the midst of an extreme heat and drought. It’s all my fault. I packed not one short sleeved shirt or pair of shorts 😂 (Random aside. There’s a 20 year old here with legs as long as my entire body. Her name is Toots. To say Toots wears daisy dukes is an understatement! But bless her sweet heart she overheard me saying I only have jeans to wear and she brought me a pair of her shorts to wear to the event. The look on William’s face when I told him this was priceless. Much like when I told him I have three helmets, a fake tail, a quarter marker stencil….the list goes on and on…..I think it’s good for him. He told me I’m Emily King. I was flattered. 🥰). At said school we walked 90% of the time. Then we would walk trot or (maybe) canter an advanced combination. Just like that. And then casually walk to the next bit. I mean, I have had faith in my training but to see it and feel it in real world application just made my heart sing! 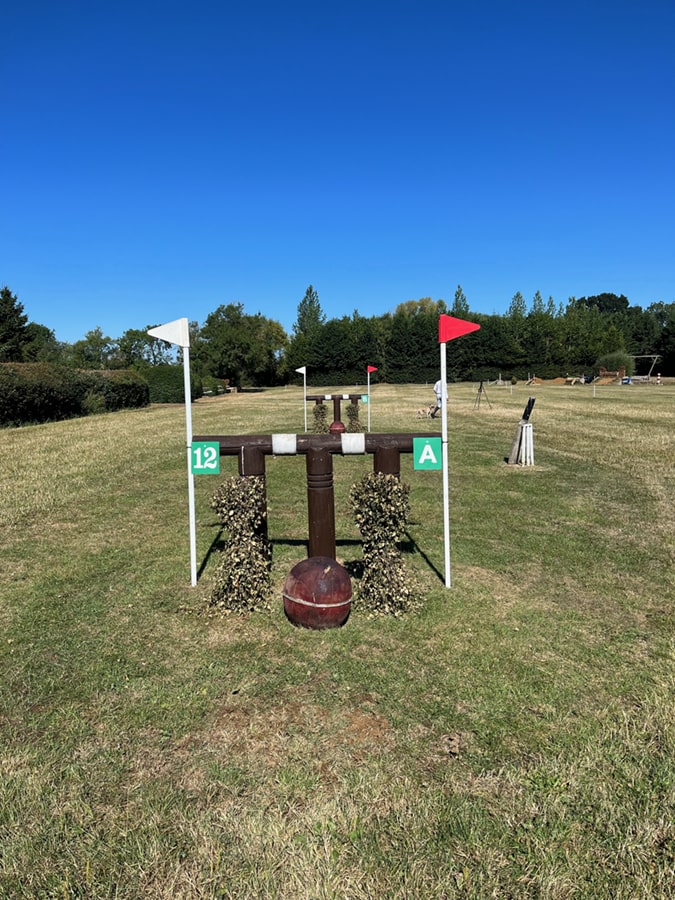 William has been unbelievably giving in this first week. No secrets. I’m here from feeding my horse breakfast oh boy in this heat it’s as early as 6, until his “tea” around 430 and then luckily the girls do lates for me. My house is a solid 20 minutes away. Ok that’s if you know how to drive a stick shift on the wrong side of the road. It’s closer to 30 for me! William is often riding shortly after I get here and sometimes even when I leave. He personally went out on the gallops to help Favian settle head to head with another horse. He’s changed my XC bit and I think I might be forever grateful! Mind you, he has an entire bit wall yes a wall. #heaven I asked him where we pick up dressage tests. He told me he has no idea but he would watch the video 🙃

Daily motivation is easy to come by. There’s a shadow box in the loo, it has 4 shoes in it. Each of which belonged to a previous Olympic mount. That’s right it’s in the loo. He’s run out of wall space 🤣 William notices everything. Half the reason he is late all of the time is because he is perfectly willing to have an insightful conversation with you at a moments notice. Everything from breeding to sales videos to FEI dressage tests. He and his barn manager and helping weigh in on everything from feeding plans to farrier schedules.

Rolling into our first competition, how can you not feel invincible?! The support system backing Fox Pitt Eventing is second to none. His Secretary made a spreadsheet of our times and printed out all of the numbers. Yes, you wear your XC bib for all 3 phases and that’s what has your times etc on it. Our lorry is bigger than some road side motels. His owners come by throughout the day with snacks, drinks, and ice cream which was just so generous. They are all fascinated by the American. Especially, my ice boots. Ice isn’t even a thing in the UK. I knew that and was prepared to buy my own. It probably cost no joke close to $200 to ship my Yeti over. But I knew they didn’t ice over here and it’s a big component to keeping Favian sound. Well, I didn’t plan on an unprecedented heat wave. Most places here don’t have ac. So I can’t even buy ice at the super market for my horse because it’s all been bought by people in the village to make it through their day!

Favian has certainly done his fair share to take one for the team. At our event, we stared at 3:45 AM and he didn’t do dressage until 3:18 PM. Before I even got on he was over it! William is big on training. You use every competition to train and you decide ahead of time what you’re trying to accomplish. Competitions are just training grounds. There’s no stretches, no hoof polish, no jackets for dressage, heck they don’t even towel off legs. But the horses are impeccably cared for. The lorry provides the ability for the grooms to walk into the horse stalls every 35 minutes on the ride for example and offer water etc. We did a giant shuffle several times through the day to graze and water the horses and clean their stalls in the lorry. William himself met me at the finish line of XC and we hosed down Favian with me still on him to cool him out due to the high temperatures. That said, I respected my position on this team. Chucked everything on to the lorry and finally went home at 11 o’clock that night after tending to my horse and my gear.

At this point I need to give a shout out to every boy and girl across the world literally who has been at Favians beck and call as this schedule is not an anomaly. Many of you might remember Paige from years ago as our summer working student. Well, Paige is more than that, above average in all walks of life, and just finished an MBA program at Hartbury over here. On her DAY OFF she came to Aston and not only end up grooming for me; but saving Williams horses as well. They’ve recently had a girl quit and all of us know what it’s like to run a man down. Can I also point out this kid brought her BCE hat all the way from Kentucky to Wales!! 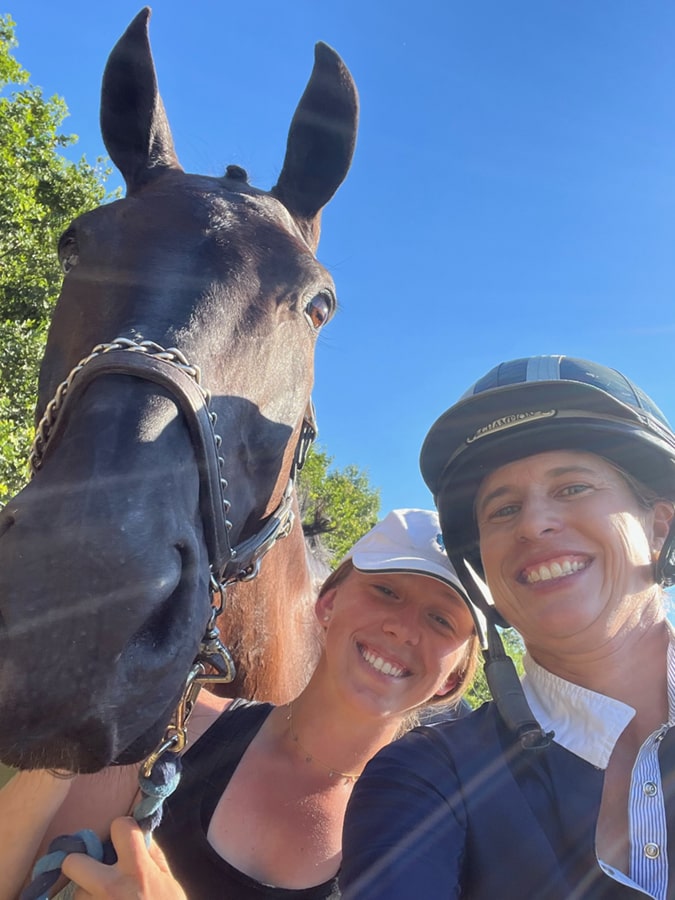 Even with all of these schooling and training tactics in mind, Favian finished 6th this weekend! I am a proud mom 😍 And recognize everyone at every time who helped me get here. We have a week of solid training together this week Favian William and I. Then I’m off to judge Blair Castle 4*. The moment I come back it’s off to Burghley. Then a week then Blenheim or WEG. The energy is infectious and contagious.

I know I have forgotten so many in this newsletter, please share! Especially with anyone involved in the auction, the generosity is so very much appreciated! The donations covered Favian and Conner flying to the UK to get this party started!