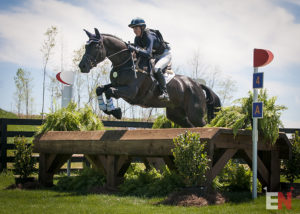 Valerie Vizcarrando and her 9-year-old Oldenburg Favian just completed their sixth one-star competition and earned a well-deserved win in The Fork CIC*. They scored a 41.9 for second after dressage and remained in the same position despite a rail down in show jumping. They produced one of only a few double clear cross country rounds in the division to secure at least second, but overnight leader Rachel Wilks and Great Expectations crossed the finish two seconds over time, giving Valerie and Favian the win by a mere 0.1 penalty point.

“He’s a relatively new horse for me and he’s really cool. It took me a bit to get him figured out but he’s starting to feel like he’s mine,” Valerie said. “He handled the atmosphere great, he was really happy to scorch around the cross country today … He’s not an inherently confident horse but he wants to do the right thing.”

Valerie and “Faves” were coming off a third place finish in the Carolina International CIC* two weeks ago. “I love that track, I love the place, I know it really well. This was not quite that same thing … He made me confident because he wasn’t waffling at all. He has these big ears and they were pricked straight forward out of the box and that was a good feeling.
“I was joking channeling my Jimmy Wofford lessons, plan for the plan to change. He was galloping great in the first field but didn’t know where he was supposed to go. I was as ready for that as you can be. You have to trust you have some training, guts and skills to call on.”

Valerie feels Favian still needs to be stronger before moving up to Intermediate. She plans to aim for Bromont for a good education over Derek di Grazia’s course and hopefully move up later in the summer.

The CIC3* and Advanced cross country gets underway at 10:30 a.m. tomorrow. There is no live streaming but we will be tweeting and bringing you as much up to the second information as possible. Click here to catch up on all of EN’s Coverage of The Fork so far and check out Instagram to see extra photos and find out what Chinch has been getting into. Thanks for reading! Go Eventing.