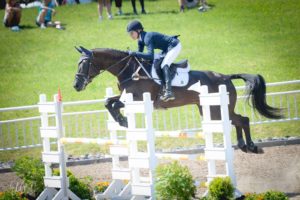 Two horses headed way up north to Bromont CCI1* to represent Blue Clover Eventing on the truly International scene! Valerie and Favian and super student Alexandra Peterson and her own Willie Wiggins made the 12 hour trek – and made it worthwhile! Favian finished a very competitive 4th in the biggest division of Bromont 2017 (40 starters!), and Alexandra had to hold her own without a JR/YR division – which she did! – to finish 15th. 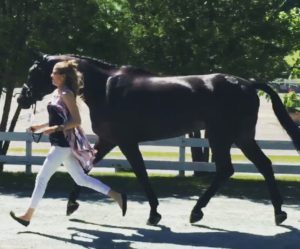 Dressage day was dramatic with the judges disagreeing on Willie Wiggins’ test by quite a margin. Favian and Valerie competed in the middle of the pack and even with a less than personal best performance, still sitting in 5th place going into XC. And after walking the courses word was on the street this was not going to be a dressage competition!

The buzz was electric in the stables about the courses at all of the levels. Big. Hard. Technical. Both Favian and Willie Wiggins were up for the challenge! The footing was still a little wet and deep in places. Being the great horsewoman that she is, Alexandra knew Willie Wiggins had lost a shoe and took it conservatively adding a few time faults to her round. Very uncharacteristic and Willie Wiggins didn’t really understand why she was holding him back! Favian and Valerie went shortly thereafter, also going around all of the jumping efforts easily and finishing exactly on the optimum time! Both pairs moved up! 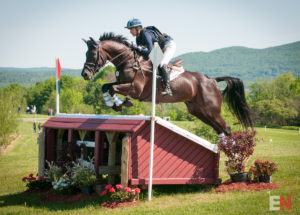 Favian and Willie Wiggins easily passed the final jog, a testament to the fitness plan at BCE as well as a statement about our treatment of our four legged friends – they get anything they could want or need! And they repaid us with lovely jumping rounds. Willie Wiggins had a rail at 4A, along with about 2o other horses as it proved to be the bogey fence of the day. He barely touched it! Favian had a dramatic finish to his Bromont experience, pulling his shoe after a spook over the first warmup fence. Between some broken english communication Valerie was under the impression she could get to the farrier (jumping in reverse order of standing there were only 3 left to jump after Valerie went!) and get back. Unfortunately upon galloping back into the warmup arena the jumps had been taken down for a water and drag session to prepare for the 2*! Favian had the first fence down on course because in essence it was his warm up! Then two fences later, the wind whipped thru the arena and blew it down upon their approach. The team proved their mental toughness and in spite of all of this jumped around the rest of the arena clear and pretty darn foot perfect to secure a 4th placed finish!