Just like that, I’ve been here two weeks! Starting to settle into the routine of not having one 🤣

Few people know that I have an adopted mother here in the UK. We’ve spent I think at this point every holiday together at least once and her love and support dwarfs the ocean that separates us. I am so fortunate that she has leant me a car for this summer. It’s is a blue Ford Focus circa 19?? and aptly named The Focus. This woman in the grocery store parking lot the other evening commented on my driving due to the number of battle wounds this beast bears. She’s lucky The Focus and I didn’t take her out 😈 The Focus is like a nappy horse, you know it’s going to pig out at least once during your ride. You don’t really know when, or where. Certainly, it is not going to be about anything expected because that would be too easy or manageable. Nope. The Focus wants to make sure I’m on my A Game at all times. It likes to be driven like a fine sports car or else you pay the highest consequences of it best case losing power steering worst case stalling out. Rarely when you’re engaged. Mostly when you are coasting. It doesn’t matter, cruising in 2nd or in 4th (speed doesn’t matter because the speedometer doesn’t work so don’t even waste your effort trying to factor that in), if you aren’t physical, all out, shifting, wheel clenching, foot hovering over the clutch, stalking the cars ahead of you to make sure you aren’t about to get stuck shifting on a hill, pedal down out of every turn, praying at every light and round about, hoping the oncoming traffic yields when the cars are parked on the street in your lane……whew well now you know what it’s like for me to drive to work and back every day. And I can do it now without my GPS! And I’ve stayed on the correct side of the road for the entire week! #winning Believe it or not this van is the predecessor to the Focus but I realize I now I haven’t take a picture of The Focus shame on me! 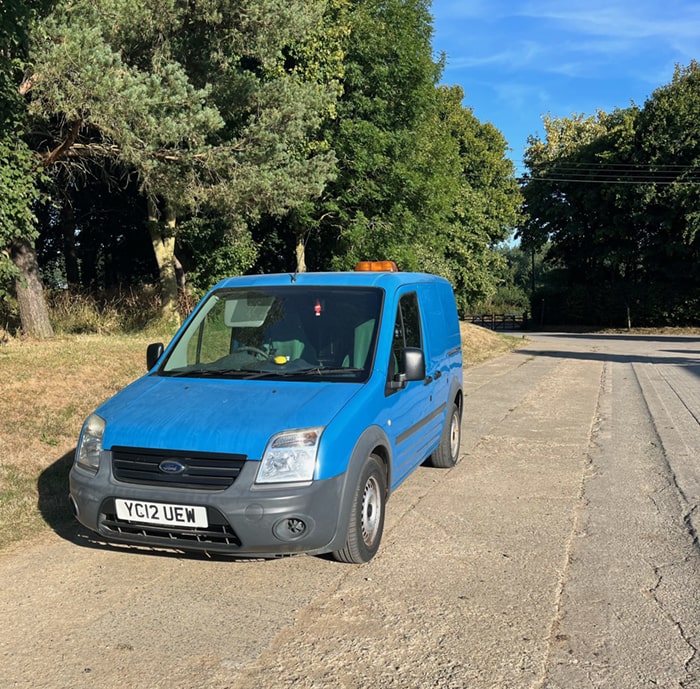 Favian has also hit a milestone at two weeks. He’s no longer quarantined! He’s able to get turned out and sadly I must admit it’s probably a good thing that Theodore isn’t here 😿 #sayitaintso The fencing is all electric and a mini could easily walk under all of it with no consequences. And thus. They have “The Cage.” Theodore would be so highly offended. James seems to accept his fate. Favian is grateful. 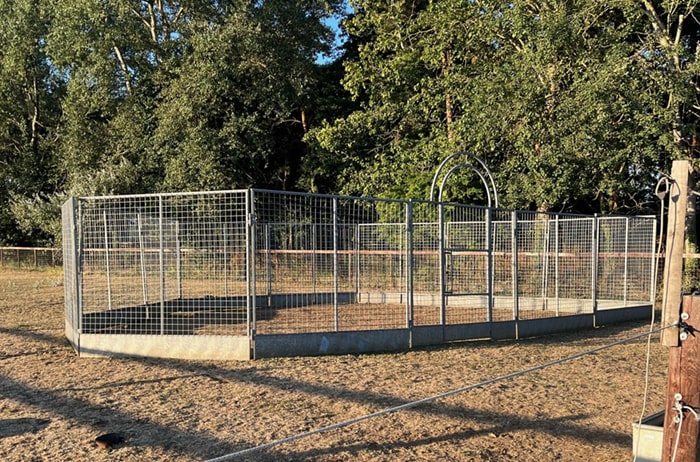 I have been very lucky that William has been here nearly this entire week for lessons. I will call it Blenheim Bootcamp! In my dressage lesson, I thought 3 times at least the lesson was over and oh no pick back up those reins and let’s make it better and that inevitably leads to something else to work on! And we did! He emphasizes softness and stillness which is rather incredible for a man whose left leg is as strong as my entire body 💪🏻 He has declared war on Favian’s mouth. Favian chomps as a habit. It doesn’t matter if it’s in his stall in the cross ties or in a 5* dressage test. It’s his thing. Well William doesn’t want it to be a thing! Another William thing! Tails! Oh boy, does this one make me nervous. I’m watching a jump session the other day and William disappears after warm up (ok maybe not all that unusual) but the reappears talking to me about something else with the pair of scissors from the feed room visible in his hands (unusual). He walks up to the horse, has the rider stop, and then and there bangs it nearly above the hocks. Satisfying? I suppose so because it was immediately gratifying to see. Terrifying? Definitely. Because I know his next target even though I have explained that we have a fake tail 😳 #sleepwithoneeyeopen ✂️ I do feel forever grateful that they have bestowed upon us a real British tail wrap. It’s so flattering and proper! Now they must teach me how to actually tie it 😬 #conner! 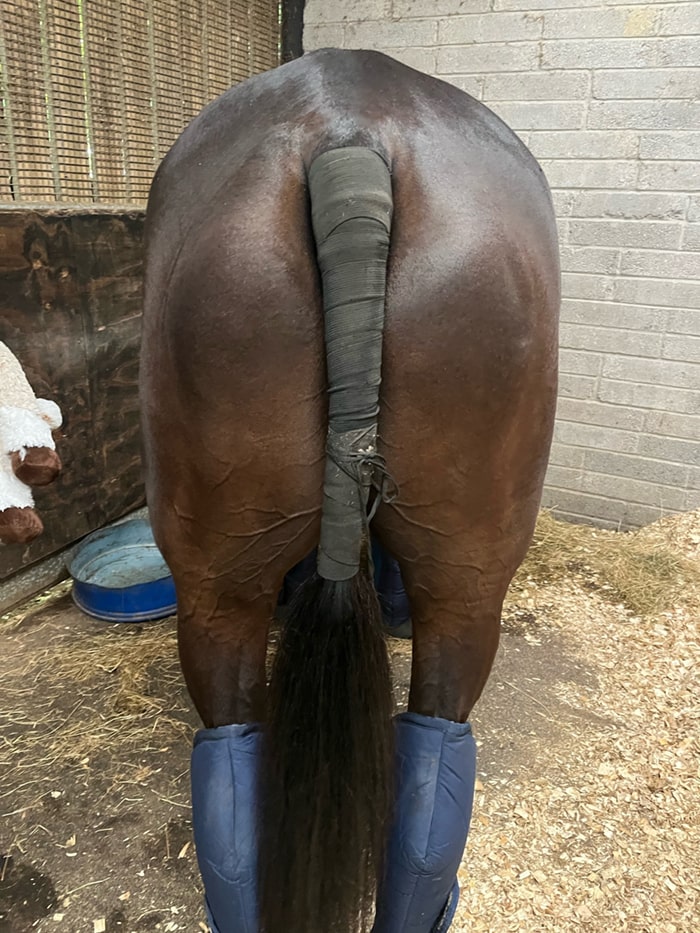 As silly as this sounds, the other biggest takeaway from this trip has been about walking. Yes. Thus far I have spent you don’t even want to know how much money and invested so much time and effort into walking in my daily lessons. It’s so hard! To walk with a purpose is really a feat and yet all of Williams horses do it without an ounce of hesitation. For hours each day. Favian and I are playing catch up and making literally every step count. To say I’ve been bullied at the walk sounds so silly; but it’s true! I have a new faith and confidence and WFP to back me up if Favian doesn’t want to hear it!

Which leads into one of our biggest moments of the week, walking on the aqua treadmill! This is something used in the States mostly as rehab; but being as cutting edge as he is - William uses it as a major supplement to his conditioning and strength program. Favian had his first session and took to it immediately. He is in good hands, these machines are only as good as the operators. Lisa (not pictured) has done this she said no less than 15k times and yet she learns something with every single horse in every single session. She watched Favian take 3 steps and told me everything I have felt for 3 years! What an incredible asset to this team! Below Fred has cookies and is introducing Favian to the small space of the treadmill. Because he has cookies, Favian will oblige! 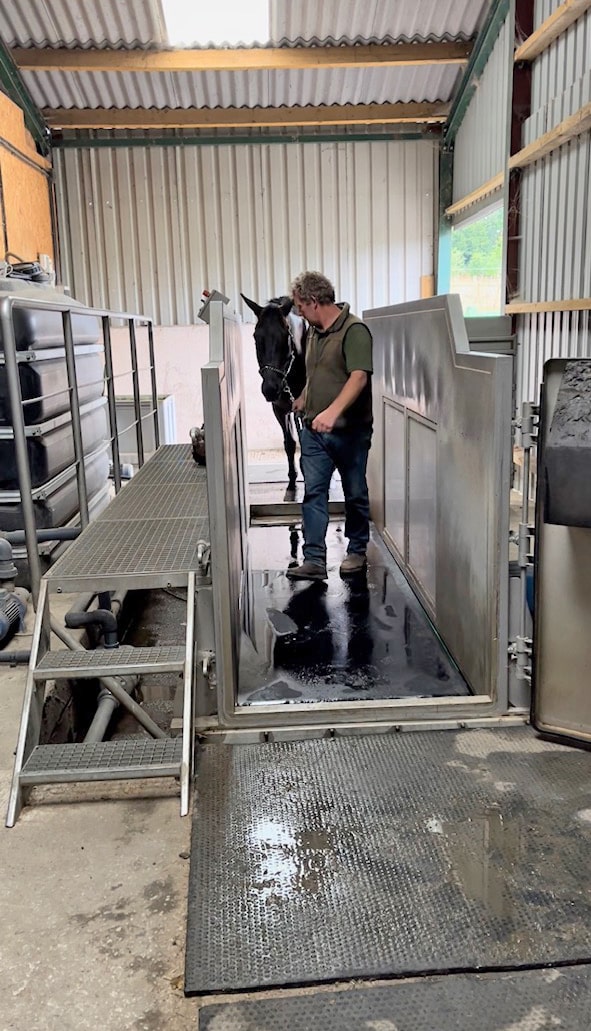 The other day William had a midday meeting and I’m so lucky that I got called up to ride his 4* horses heading to Bokelo! What an opportunity for me on so many levels. Namely, I am rather worried about my own timing and fitness only concentrating on one horse when I’ve left a program of 18 behind. (Quick shout out to my girls and my clients because they are making me so proud with their daily accomplishments and winning weekends!!) William is so generous; but let’s face it he is also so good that he has these horses tuned up in moments from stepping back in the tack 🙃 I enjoy watching him ride. I’m this creepy American shadow I dare say stalker on the yard just hovering daily lol but I’m riding every horse with him or at least trying to. I recognize my limitations however and have adopted a fitness program in the gym upstairs in his office. I call it my dojo. You walk in to hundreds of pictures on the wall. Mostly winning. Some epic saves, and some epic fails. Championships Trophies are on the ground being used as door stoppers! In the middle of my most trying defeated moments of the workout session, I look up to see WFP smiling on some podium or grinning on a victory gallop.

And I fight. And I Focus! Don’t you try to coast through your week! You know I won’t, either!

PS please share with anyone and everyone you think is journeying alongside us! So grateful for all of your love and support!

Posted in Competitions, Updates From England